Diplomacy's Children
A YA Demi-Novel 69,400 words 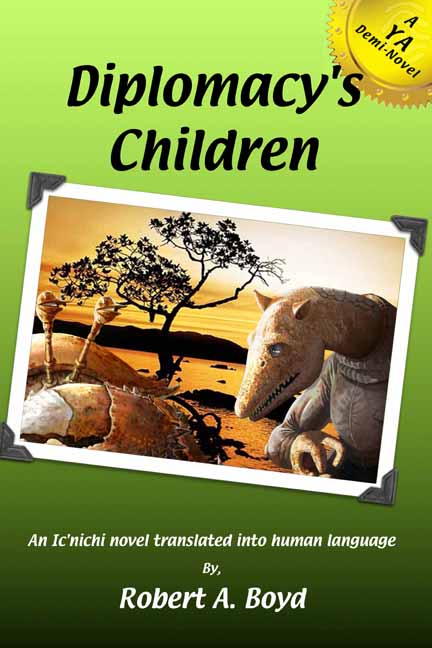 A New Generation Steps Forth...

Young E'draMinr, starry-eyed recruit in the elite 'Dark Grays', is discovering that life is not nearly as simple as it seemed when he was a hatchling. Plagued by zero-G sickness, on the ragged edge of washing out due to poor grades, his worst nightmare is a self-centered, foul tempered human youngling who is making his first interstellar training cruise miserable.

Now they're stranded on an alien world. Both are injured, and the planet is inhabited by primitive natives with who-knows-what ideas about these mysterious visitors. Not that it matters: the planet is about to be destroyed anyway.

They are doomed unless their ship can get to earth and back with a new shuttle in record time, they can find something to eat, the natives decide not to eat them, and they don't kill each other while awaiting rescue.

The fact that the Ic'nichi and the humans are on the brink of interstellar war - well, there's no sense in worrying over trivia at a moment like this.

Fifteen years have passed since those heady days of the 'Diplomacy' trilogy, and the descendents of both races pick up where their forebearers had the sense to leave off in a Tour De Farce which promises to outmatch the dubious achievements of the prior generation. Interstellar diplomacy will never be the same!

My writing career started because I wanted to try my hand at creating a realistic race of aliens who were not the typical all-wise-all-knowing superbeings or crude movie monsters. That modest ambition took on a life of its own in the riotous 'Diplomacy' trilogy and later in the dramatic 'MacKenna' trilogy. I should have left it at that, but the Ic'nichi have become real people with lives worth relating. I was also eager to expand my writing repertoire into the Young Adult field - which required a juvenile POV. It didn't take long to spot an opportunity for a spin-off from the characters in the original 'Diplomacy' story line. The result is about what one would expect from them.

In entering the Juvenile and YA field, I want to present not only a lively and entertaining tale, but strong ethical themes as well. In this instance, the recurring themes are the value of education, the challenges and obligations of military service, dealing with the pressures of family, and the virtue of keeping an open mind in dealing with outsiders. All in all, I think it worked out quite well.