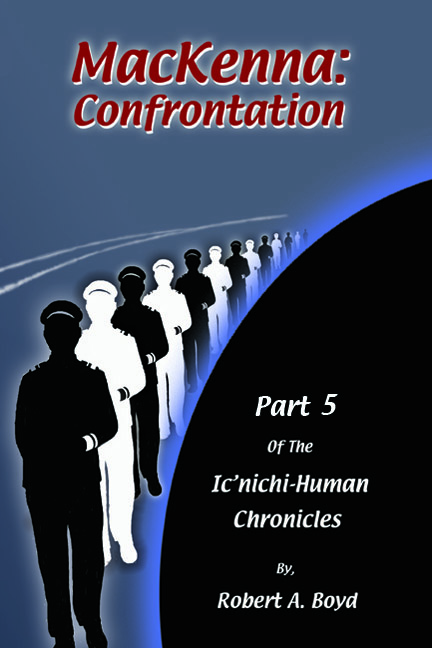 War is brewing between the Ic'nichi and the humans. A rising tide of human fanaticism threatens to tear the Concord apart, and the Ic'nichi have just made a stunning discovery: the humans have their own version of Admiral MacKenna! By best estimates, Mac can double the effective strength of any fleet he commands, so the Ic'nichi have no choice but to field one of their own. When an unstoppable force like Admiral Brian A. MacKenna meets itself head-on, anything can happen!

The surreal saga of earth's greatest soldier continues in Part 5 of the Concord Cycle. Admiral MacKenna is called back from the dead once again, this time to fight for the Ic'nichi against the humans. A radical faction on earth threatens to plunge the Concord into a devastating race war; both sides are arming feverishly, and tensions are at the breaking point. Only a slick finesse move can prevent a holocaust, which takes him on a desperate mission back to Singapore, scene of his worst nightmares. And as if Mac doesn't have enough problems, this time he has to face himself!

One of the big temptations of being an author is to take a favorite, well defined character and put him into a completely off-the-wall situation to see how he wiggles. When I finished 'MacKenna', I realized I had a vehicle for a trilogy. I also saw not only an opportunity to try a completely new format (a spy thriller), but to put 'Mac' through the wildest situation that unfortunate (im)mortal could imagine in his worst nightmares. As the story grew, it also played to his greatest inner torment - his epic failure in guarding Singapore during the Collapse - which haunted him for the rest of his life. The result is a tale of a man driven not only by his uncompromising sense of duty, but by his inner shame and remorse as well. These forces often conflict, and Admiral MacKenna finds himself controlled by more than controlling his fate. The resulting tale is dark, which is perhaps the best sort of character driven storytelling of all.