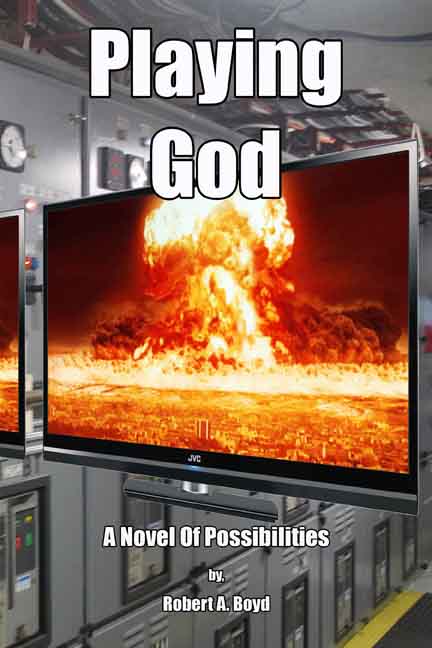 Someone had to save humanity from itself, but who would save him from his own humanity?

She fidgeted nervously in the overstuffed chair. "What are you going to do, Dan?"

"I'm going to kill someone, which will alter the Omega Time Line and, hopefully, prevent a war."

She was appalled when that sank in. "You kill people!? You've been playing God all these years?"

"I haven't been playing, Brenda."

He gave her a bleak, weary look. "I'm a survivor of the Alpha Time Line. Being insane would help."

"Brenda, this has to be done. There's no way to alter history except by altering the fate of those who make it. He has to die so billions can live."

Have you ever pondered the 'might-have-beens' of life? Have you ever wondered if your destiny might have taken a different course? Brenda Hayward, former centerfold model, found herself caught up in such a web of 'might-have-been': an alternate future filled with terror, danger, and sheer, unspeakable horror.

Trapped in a high-tech hell when an experiment goes badly wrong, she faces a hopeless struggle to save not only herself, but the human race too. Her one resource is her hard-won humanity earned in a lifetime of service. Her one hope is the man who thrust her into this nightmare, the man who interfered in the course of time and turned reality itself on its head, the man whose obsession is destroying him from within. She must save him from himself and the technological abomination they are trapped in if anyone is to get out of this alive!

I must offer a small confession: this work is - slightly - autobiographical. Yes, there really was a 'Brenda Hayward'. And, yes, I discovered her centerfold way back in my early years. And, yes, I often wondered about that young woman: what she was really like, what sort of person she was. The idle fancies of youth, I suppose.

This story came about because that innocent fancy got caught up in the disturbed, Machivellian mind of a spec-fiction author. (There's an old scientific principal that nothing pure can remain uncontaminated for long,) Honestly, I have no idea what became of that young woman (I rather wish I knew), so this tale is one part 'names-changed-to-protect-the-innocent' and about ninety-nine parts dramatic license. Hopefully you will find it an entertaining speculation: we've all had these fancies, after all.