MacKenna: A Knight Of Ghosts And Shadows
100,000 words, estimate 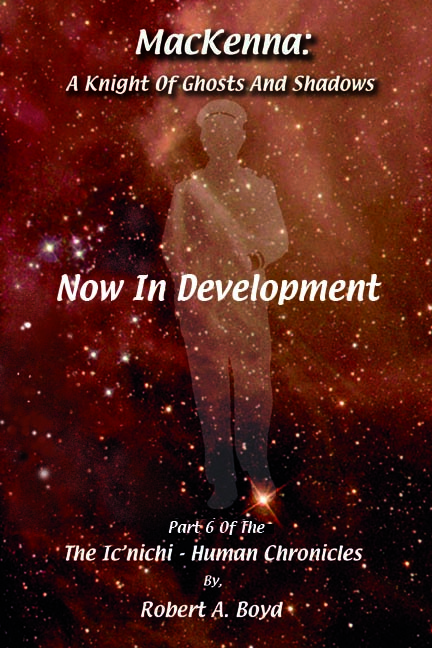 The creature whose memories were recorded on the ancient data disc called himself a 'human', from a world called 'earth', but no one had ever heard of humans or earth—or their stellar sphere, or the near wars they faced at various times, or their considerable impact on the last two centuries in general. It was gone—all of it—as if it had never happened.

Who was this mysterious human who called himself Brian MacKenna? Where did he come from? Why did the 'Grays' have his identity recorded on an ancient computer disc? And most troubling of all, where did the last two hundred years of Ic'nichi history go?

He desperately needed to find the answers, and he wouldn't let them quit...ever...until they found them...

Mac MacKenna is back from the dead once again, and this time he faces the ultimate mystery. The entire human race has vanished! For someone who devoted his life - several lives - to preserving humanity, this is an afront not to be endured. What to do about it, on the other hand, is the real question...

Development of this story has been seriously delayed by a combination of circumstances. Release date is uncertain, but will hopefully be in 2020. I'm sorry about this hangup, but it couldn't be helped.

Over the course of writing the Concord, Admiral 'Mac' MacKenna has become one of my favorite characters. Strong - immensely iron-willed - but brittle, Mac is a study in the terrible human cost of war and the mindset of those who excel at it. A callow youth forged for decades in the white heat of conflict, he seems on the outside to be a soulless machine. But inside, behind the iron fascade, is a man driven, haunted by the past, and grimly determined to make his life-long sacrifice matter. When it came time to close out the MacKenna trilogy and the Concord Saga, it seemed only fitting to confront Mac with the ultimate challenge any genuinely patriotic person can face - the daunting prospect that it was all for nothing. But then, Mac was never one to take 'no' for an answer...