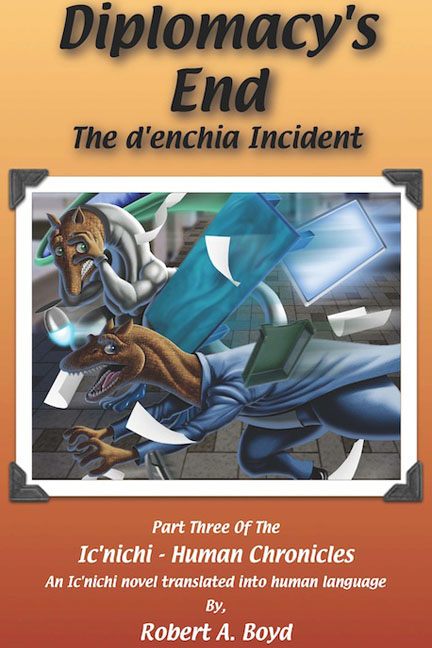 The sad part was that we all meant well...

Everyone—us, the humans, the Dreamsingers—really wanted to do the right thing for all concerned. And as usual with good intentions, the results were anything but.

You know you're having a bad day when you suffer two political coups, you and all your friends are hospitalized with an imaginary illness, and you fight an interstellar war lasting all of five minutes.

Friend and foe become interchangeable, and it's hard to tell if panic, paranoia, or a good stiff drink is the best option under the circumstances. Things never go just a bit wrong in interstellar diplomacy! As the humans say, some days it doesn't pay to get out of bed.

The uproarious saga of the Ic'nichi diplomatic efforts with the humans continues...

There is a technical term for the diplomatic process as it has played out between the Ic'nichi and the humans: Reductio ad absurdum. One must expect a certain, shall we say, 'confusion' in dealing with alien races, something often addressed in Speculative Fiction, but in a way, this series has charted bold new horizons in literary ledgerdemain.

It started out (eleven years ago!) as simply poking fun at the pretentions of the literature, and has grown into a multifasceted Universe full of interesting characters, bizarre situations, and the best of all possible intentions run disastrously amok. The fascinating thing about this story (IMn/sHO) is that it is all based on how we would probably react if we were contacted by an advanced alien race today.

The story hasn't always been a happy one: the humans have been through a series of catastrophes which we can see looming on the horizon even now, and interstellar relations must, of necessity, include hostile encounters. Still, for all its dark moments, the story line is one of hope and potential, of growth and change, of two fundimentally different species with two fundimentally different world views seeking common ground for the betterment of all.

If they can do it, surely we can too.