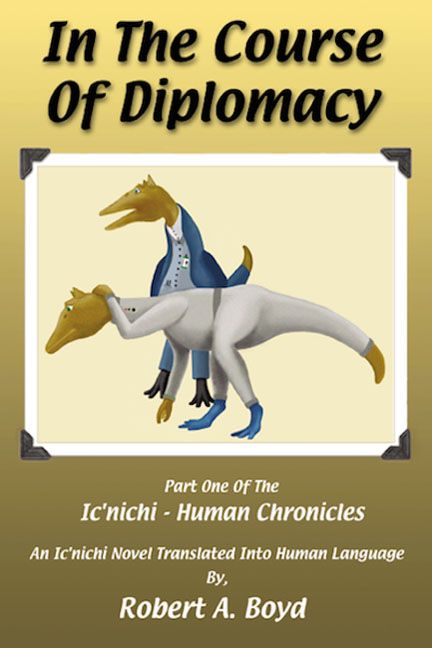 ...and it was a crisis right from the start. We avoided an interstellar war by sheer luck, but both sides were still on edge, and the situation was explosive.

Now we were trying the uncharted waters of interspecies diplomacy. No one knew what to expect: we had never faced a situation like this before.

All we could be sure of was that the humans were unpredictable, unstable, and just as terrified of us as we were of them. Anything could happen, may our Ancestors protect us!

Here is the long-awaited tell-all memoir of that first Ic'nichi diplomatic mission to earth: the authentic blow-by-blow account of crisis management - and mismanagement - on a cosmic scale. You read the official story in your textbooks. Now learn what really happened!

Thus begins the Ic'nichi - Human Chronicles: the First History Of The Interstellar Concord. This is the remorseless tongue-in-cheek account of First Contact as seen from the aliens' point of view, recounting the Ic'nichi's ill-starred diplomatic herd's gyrations and misadventures among the strange vertical 'humans'. This incisive (some call it 'muckraking') documentary reveals the embarrassing untold facts of personal bickering, ill-conceived plans, sheer dumb luck, and bureaucratic infighting; starting with how they had to steal everything they needed for their new embassy, and going downhill from there. First Contact will never be the same!

This book was my education into the art, craft, and lifestyle of genre fiction writing - and what an education it was! A little background on why I became an author: one thing that has always bugged the hell out of me are the childish stereotypes that have become a millstone around the neck of the genre. One evening, I was watching a particularly bad episode of classic Star Trek, and said to myself in disgust, "Even I can write better than that!" From such innocent beginnings...

It was summer break, and Chicago in July and August is not pleasant. The school computer center was air conditioned, so for want of anything useful to do, I tried my hand at a few short stories. Among the many hackneyed cliches plaguing science fiction, a particular gripe of mine is these big-headed-scrawny-bodied-gray-skinned-no-clothes-but-they-don't-need-'em-because-they're-sexless-all-wise-all-knowing-Close-Encounters space aliens. They are the single greatest curse on the genre, and how they endure it is beyond me: as I figure it, the Roswell crash must have been a suicide. So I set out to create a race of aliens who are anything but.

My early fumbling efforts produced several poorly written short stories on a common theme. As that theme advanced, the POV shifted from human to alien (I hadn't even come up with a name for them yet), from drama to humor, and from third person to first person narrative. Somewhere along the way, I realized that my natural forte is novel length, so when I began casting about for a first novel, those short stories were right there waiting to be combined into a single effort.

The miracles of angst...